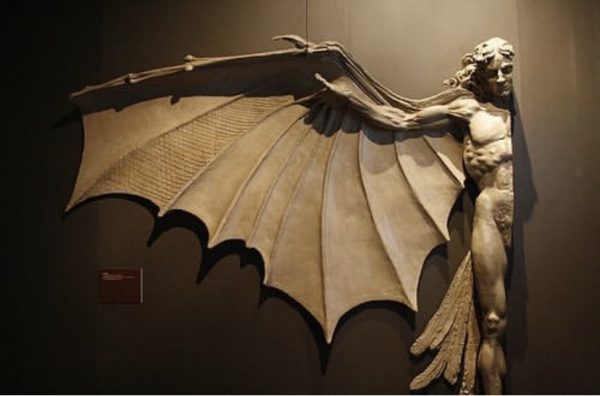 Amongst Leonardo da Vinci’s greatest passions was the desire to fly, as expressed in the many studies and drawings he performed in his lifetime. Da Vinci also designed several man-powered flying machines with artificial wings, a parachute, and a light hang-glider.

Da Vinci (1452–1519) was an Italian artist and polymath, widely regarded as the “Renaissance Man”. Most famous for his paintings, da Vinci was prolifically involved in various other niches, such as civil engineering, chemistry, geology, hydrodynamics, mathematics, optics, physics, pyrotechnics, and zoology.

The statue depicted here is based on da Vinci’s concept for artificial wings, and was displayed at the The Tech Museum of Innovation, San Jose, California in an exhibition titled “500 Years Into the Future” in 2008/2009. The exhibition was the most comprehensive of its type and showcased the art, science, and engineering works of Leonardo da Vinci.

It is not known who the sculptor of the work was.