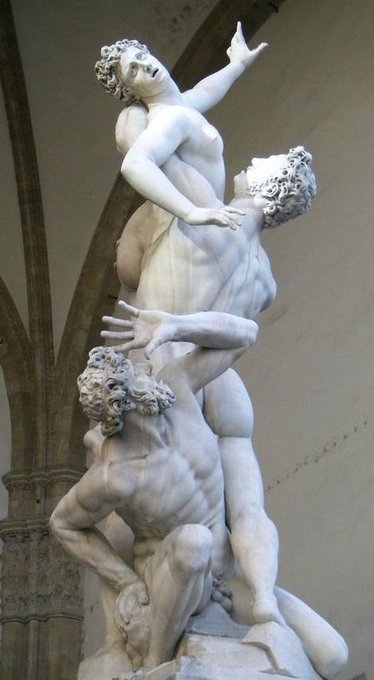 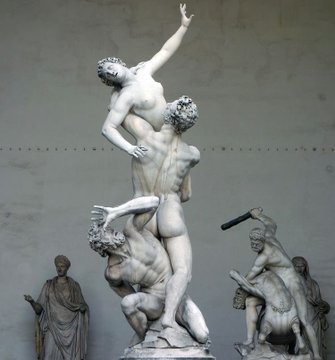 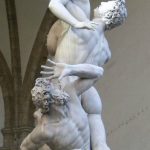 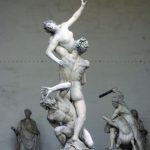 Abduction of a Sabine Woman

Giambologna’s “Abduction of a Sabine Woman” is an iconic statue in the figura serpentinata style from 1581 that stands as an example of the artist’s incredible skill and attention to detail. The sculpture, which is extremely large at 410 cm in height, was crafted from a single block of white marble, making it the largest block ever transported to Florence.

The scene depicted in the artwork is of three nude figures: an old man crouching at the end, a young man in the center who lifts a young woman above his head. The woman reaches her right hand out and her left arm wraps around her captor’s neck. Giambologna achieved movement and dynamism with the “figura serpentina” (S-curve) concept as well as an upward snakelike spiral motion. This also makes for different views depending on which angle it is seen from.

The statue further demonstrates Giambologna’s masterful understanding of human anatomy and proportioning as each figure has been carefully sculpted with finely detailed facial features and musculature. From the arms that are gracefully curved to capture strength, to the man’s tense body forming a strong base, to how all figures seem connected through their eyes – these elements combine to create one powerful image that grabs attention and admiration centuries after its creation.

It has since become one of Giambologna’s most famous sculptures; establishing his reputation as one of Italy’s greatest ever sculptors and inspiring many others throughout art history.