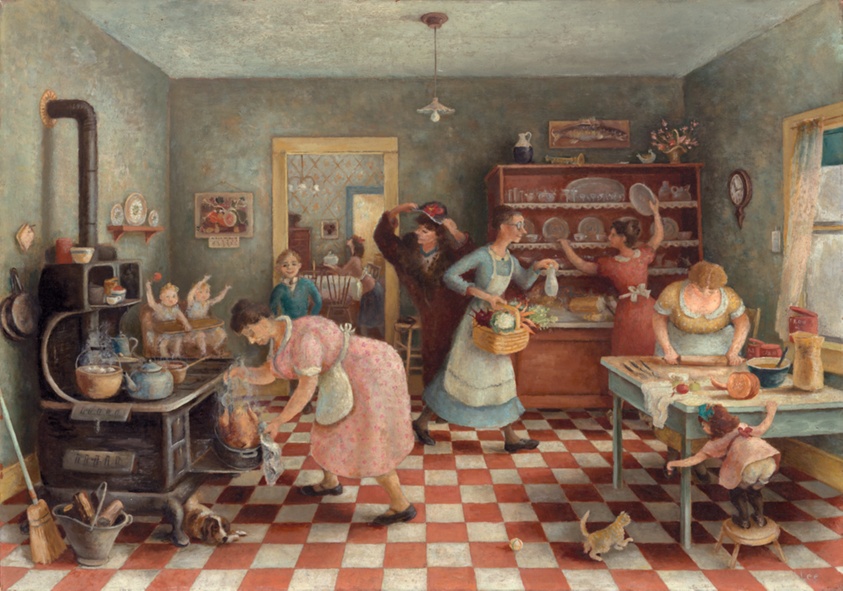 Art, Thanksgiving and the History of Black Friday

Home » Blog » Art, Thanksgiving and the History of Black Friday

Throughout history, people have been giving thanks after their fall harvest in a way that spans cultures, centuries, language barriers, and the hardships that befell them in that time. Thanksgiving and the history of Black Friday are closely intertwined, and here we break it down in an easy-to-follow timeline – along with the art that best describes it.

Jewish, Greek, Native American, Roman, and Egyptian people (amongst others) are all noted for celebrating Thanksgiving – long before the Mayflower landed on US shores and before it became a national holiday (in the US).

Thanksgiving and the History of Black Friday in the US

Giving thanks to the gods we worship is not a new tradition. Heck, it’s not even a cultural thing; it’s so much more than all of that combined.

With so many cultures celebrating Thanksgiving in one way or another, it stands to reason that Thanksgiving in their country would have a different timeline to other countries.

In the US (and now worldwide), the Black Friday / Cyber Monday shopping phenomenon happens the first Friday and Monday, respectively, after Thanksgiving.

Thanksgiving in the 1600s

1620 – The Mayflower departs England, bound for the Americas and a new life in September. Of the 102 known passengers aboard the ship, only 53 would live to see that. The journey would last for 66 days, taking passengers to the tip of Cape Cod, and on to Massachusetts Bay.

1621 – The first winter is recorded as brutal. Life is harder than expected and most of the new colonists remain on board the ship. Exposure to the elements, scurvy, and outbreaks of contagious diseases is just part of the problem, but by March of the following year, they’ve moved ashore. The settlers are astonished to learn that some members of the native tribes speak English.

With language no longer a barrier, the settlers are taught how to survive the Americas. An alliance is formed with a local tribe, the Wampanoag, which would endure for over half a century. This alliance is the reason the tribe are invited to celebrate the Pilgrim’s first harvest Thanksgiving in late November of their first year. America’s “first Thanksgiving” festival lasts for three days.

1623 – Thanksgiving skips a year due to severe drought in the region. Then-governor William Bradford calls for days of religious fasting as a result of the drought.

As the drought eases, hunger is replaced by a sense of abundance, prosperity, and freedom from want. Thanksgiving and religious fasting become commonplace amongst most of the other New England settlements, too, though without much structure. 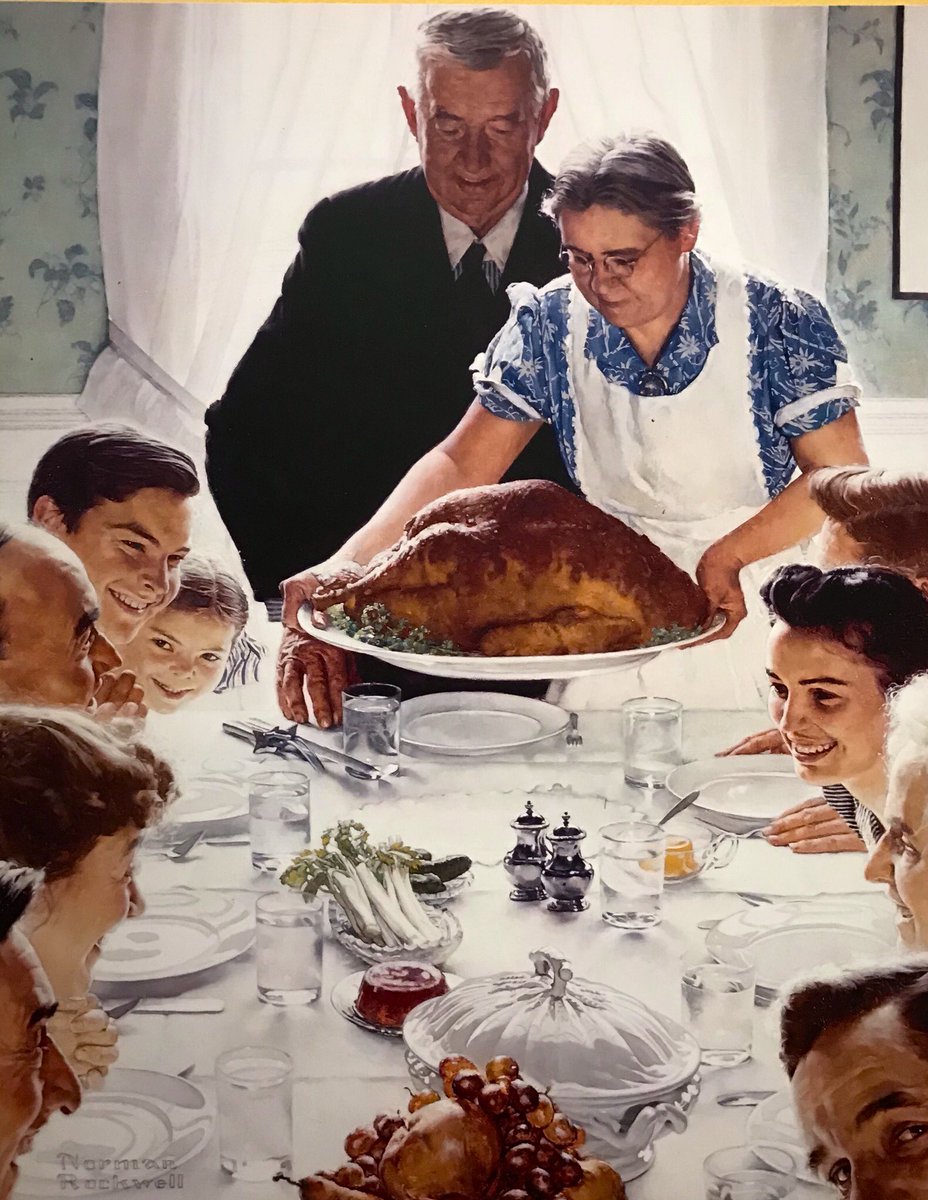 Thanksgiving, though a new tradition, still had no structure to it. Known more as a cultural norm than a firm tradition, things would carry on this way for another 166 years.

Thanksgiving in the 1700s

1789 – The American Revolution brought change in the form of one or more days being designated as Thanksgiving per year. In 1789, George Washington issued the first Thanksgiving proclamation and called upon Americans to express their gratitude for what he called “the happy conclusion to the country’s war of independence”.

The successful ratification of the U.S. Constitution was certainly cause for thanks and celebration!

Thanksgiving in the 1800s

1817 – Thanksgiving is officially adopted as an annual holiday, with New York becoming the first of several states to do this. However, there was still no formal date announcement, and the American South continued to be oblivious of the “new tradition”.

It would take almost four decades for the author of “Mary Had a Little Lamb” to get the President to proclaim Thanksgiving as a beacon of hope, thanks, and goodwill. 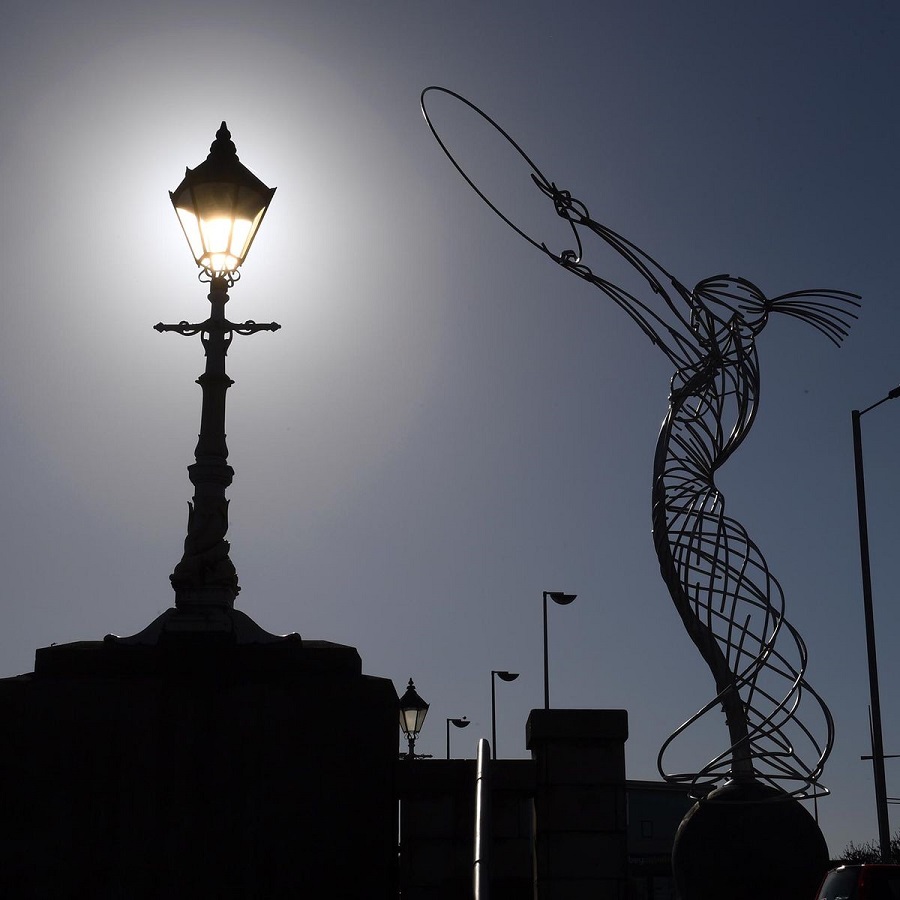 1827 – Noted magazine editor, prolific writer, and accomplished author Sarah Josepha Hale launched a campaign to designate Thanksgiving as a national holiday with a set date. Known as the “Mother of Thanksgiving”, Hale published scores of editorials, sending huge amounts of letters to governors, senators, presidents, and anyone else that she thought could sway a decision.

Her campaign would continue for 36 years.

1863 – The American Civil War (1861 – 1865) would come to sway the decision. Recognizing Thanksgiving as an opportunity to connect with the masses at a time when hope was at its lowest, Abraham Lincoln finally agreed to proclaim Thanksgiving as a National holiday with a set date of the final Thursday in November. He begged Americans to ask their gods to “commend to his tender care all those who have become widows, orphans, mourners, or sufferers in the lamentable civil strife” to “heal the wounds of the nation.”

Thanksgiving and the History of Black Friday in the 1900s

1939 – Franklin D. Roosevelt has an idea to use the holiday as a way to boost sales in the economic downturn at the time, known as the Great Depression. Roosevelt’s plan met with derision and passionate opposition, earning it the nickname of Franksgiving.

1941 – Roosevelt signs a Thanksgiving bill, declaring it the fourth Thursday in November.

1952 – By this time, large department stores are using the day after Thanksgiving as parade day, realizing that the exposure is great for business. Unofficially, the day marks the start of the Christmas shopping period, but there’s a lot of competition in this space. Retailers agree that there would be no competitive Christmas advertising before the parades are over.

1975 – The New York Times specifically refers to “the busiest shopping and traffic day of the year” in Philadelphia as Black Friday in their print copy dated November 29.

1981 – Retailers look for ways to make the day (Black Friday) have less of a negative connotation. An easy explanation seems to be hidden in the use of accounting terms… Most retailers tend to operate at a financial loss until Christmas (thus, January through November) when large spend is received. Profit therefore increases during this holiday season, which is said to begin on the day after Thanksgiving. Loss is recorded in red on financial statements, while once-common accounting practices suggested black ink be used to indicate profit. This explanation has never really taken off. 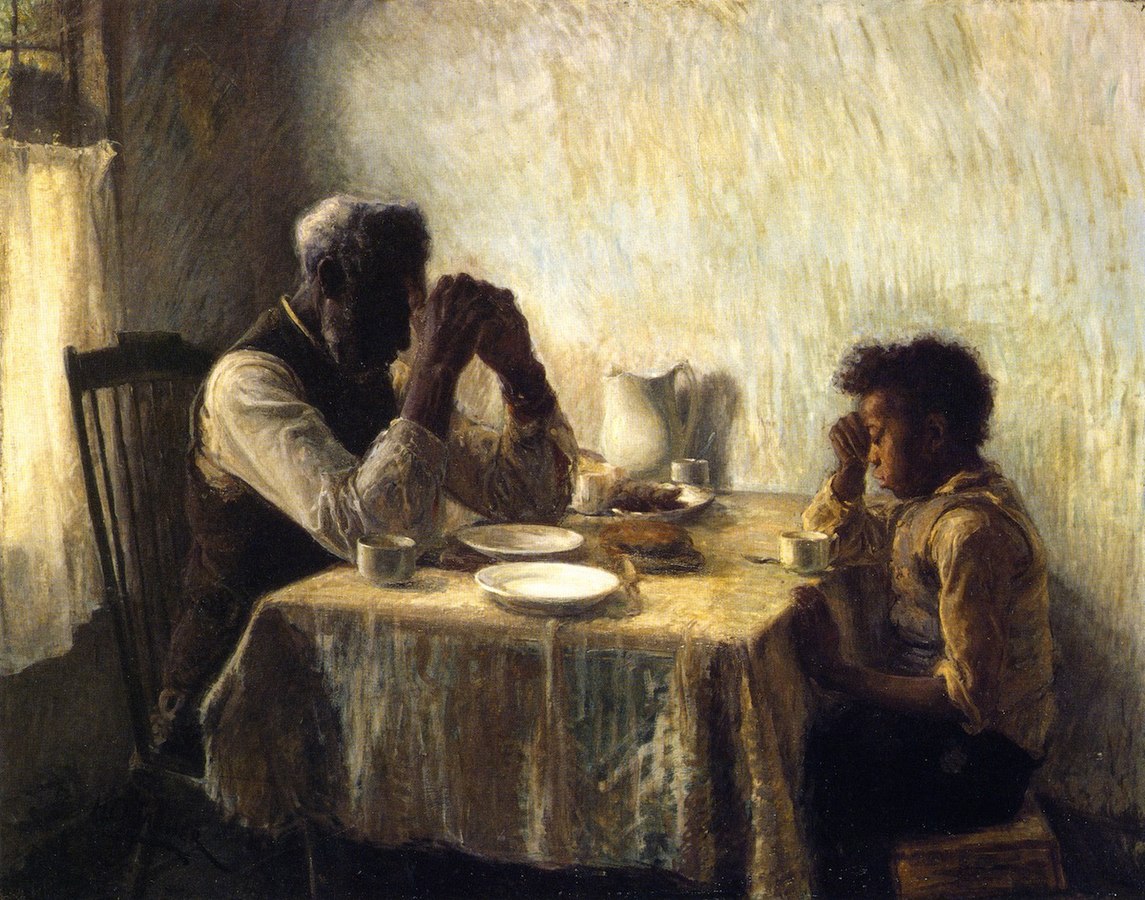 Thanksgiving in the 2000s

2009 – Black, Gray, or Brown Thursday raises its head. Retailers push opening times on Black Friday to earlier and earlier in the day, eventually going back as early as midnight, Kmart opens on Thanksgiving evening at 7 P.M. so shoppers can skip Black Friday traffic and still get home in time for family dinner.

2012 – A Gallup poll indicates that less than one in five American adults have any plans to shop on Black Friday.

2014 – By April 23rd “.blackfriday” had joined the ICANN top-level domains listings, which include the more traditional domains such as .com, .net, and .org.

Black Thursday sales are dismal. A growing number of retailers go back to closing on Thanksgiving the following year. Walmart takes a stand and pledges to give its customers the same deals for online sales made.

Retailers are criticized for not allowing families to be together on the holiday and for the perceived over-commercialization of Thanksgiving. “Thursday doorbuster sales” drop prices to ridiculous levels for one night only, prompting consumers to sacrifice Thanksgiving dinners to avoid missing out on these prized items. Fear of missing out (FOMO) on never-to-be-repeated sales results in more criticism over Thanksgiving retail sales behavior.

Spending volumes for Black Friday fall (for the first time) since the 2008 recession. Christmas creep is blamed as a major factor for the diminishing importance of Black Friday.

Retailers extend their Black Friday offerings to include most of the month of November, with an emphasis on the day after Thanksgiving. Christmas Creep is now a part of the Black Friday phenomenon, and retailers use the weekend to introduce Cyber Monday, with a predominantly technical focus on gadgets, TVs and related machines, computers, and mobile devices.

2015 – Amazon coins “Black Friday in July”, promising customers amazing deals on “Prime Day”. This takes a year or two but becomes a trend, and other companies and websites begin offering the same kind of promising deals.

Neil Stern of McMillan Doolittle states that Black Friday lost its meaning on many fronts because so many stores stayed open or opened up on Thanksgiving. A growing number of retailers had started their sales even earlier in the month, and were beginning to offer online-only shopping deals.

2020 – The decline in trend continues, and some claim Black Friday is less important than before due to online shopping trends, which were heavily accelerated by the coronavirus pandemic. The pandemic prompts retailers to extend their holiday deals over a longer period, some as early as October.

Less people shop in person on Black Friday 2020, and a vast amount of Black Friday took place online. Market researchers note that nonessential items were not promoted as heavily during lockdowns to balance the effect of lower production and a lack of availability of some in-demand items.

The trend to spend precious time with families instead of out shopping is reflected in statistics from Adobe Analytics, who report that online sales reached $9 billion in 2020. This marks a 22% increase on figures from the previous year.

Both RetailNext and SensorMatic Solutions record an average of 50% decline in foot traffic to stores.

Almost all retailers abandon efforts to hold doorbuster sales on Thanksgiving. Gatherings and crowds due to ongoing COVID-19 pandemic restrictions force more and more people (and retailers) online. Adobe Analytics declares a record-breaking online shopping total spend of $5.1 billion. This figure is 21.5% higher than in 2019.

2021 – Most major retailers close their doors on Thanksgiving. Target declares its decision to be permanent. A minority of essential services such as pharmacies, dollar stores, or grocery stores who do not traditionally hold doorbuster sales still remain open.

2022 – Online shopping continues to rise in popularity, fueled by the technological revolution the COVID-19 pandemic caused. Retailers recognize the dramatically altered shopping patterns of their customers and accelerate their business models to meet the challenge.

Spending will continue to increase, but with Black Friday no longer lasting just a single day – and at least half of all shoppers now spending online – the original reference to chaos (made by Philadelphia police in 1952) somehow doesn’t seem appropriate anymore.

Family, togetherness, and thanks for good health seem to have come full circle. With Thanksgiving Thursday no longer being used as an excuse to lure shoppers with crazy deals, let’s hope that our loved ones will be home for Thanksgiving dinner this year. 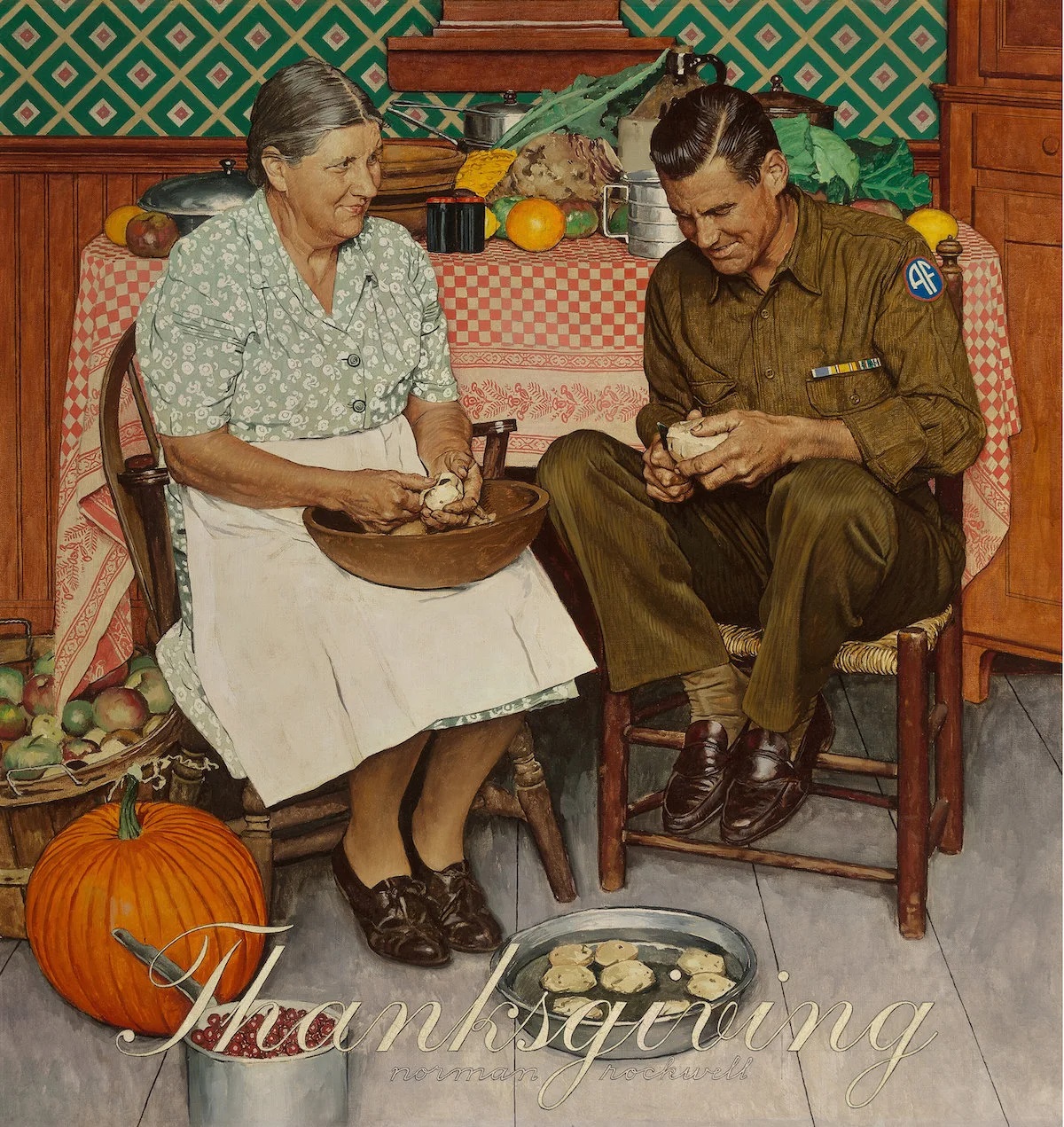 With special thanks to Wikipedia, History.com, and HuffPost, used as source material to compile the History of Thanksgiving.