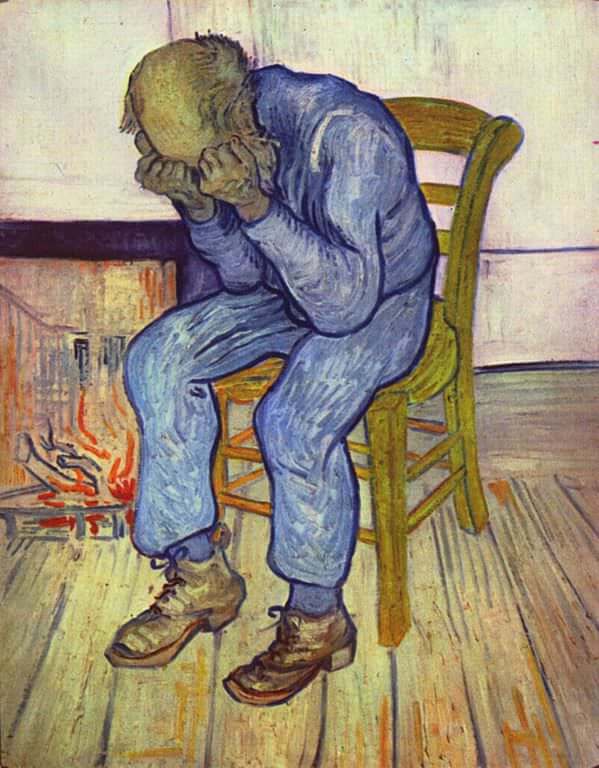 At Eternity’s Gate is an oil painting by Vincent van Gogh that was completed in early May, about two months before his supposed suicide in 1890. Dealing with a severe relapse in his health at the time, the painting is based on an early lithograph that was based on a pencil drawing.

The pencil drawing, known as Worn Out, was part of a series of studies of a pensioner and war veteran named Adrianus Jacobus Zuyderland from 1882. Completed at The Hague, this pencil drawing was itself a reworking of a drawing and watercolor van Gogh had made in 1881.

Remarking to himself in his journal, van Gogh’s comments on the painting were:

“It seems to me that a painter has a duty to try to put an idea into his work. I was trying to say this in this print – but I can’t say it as beautifully, as strikingly as reality, of which this is only a dim reflection seen in a dark mirror – that it seems to me that one of the strongest pieces of evidence for the existence of ‘something on high’ in which Millet believed, namely in the existence of a God and an eternity, is the unutterably moving quality that there can be in the expression of an old man like that, without his being aware of it perhaps, as he sits so quietly in the corner of his hearth. At the same time something precious, something noble, that can’t be meant for the worms. … This is far from all theology – simply the fact that the poorest woodcutter, heath farmer or miner can have moments of emotion and mood that give him a sense of an eternal home that he is close to.”